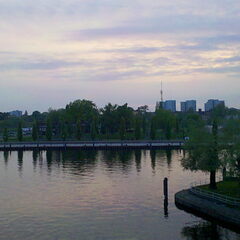 6 Android applications with no iPhone equivalents

Having used an iPod touch for more than a year I am very happy with my new Android phone. There are a couple of reasons, but the most important one is the Android SDK. It's more liberal than Apple's counterpart and therefore allows the creation of the following six Android applications that are missing equivalents on the iPhone/iPod touch/iPad.

There are all kinds of emulators for NES, SNES, GB, GBC, GBA, Sega, C64, ZX80 and others in the Android Market. The iPhone Developer Program License Agreement states in 3.3.2 that no interpreted code may be used in the application. This and the fact that there is no way to to copy the games to the phone file system prevents emulators from being available on the AppStore.

Locale always runs in the background and whenever I am near 500m of my university, the phone switches automatically to silent mode. Similar to this, an GPS tracker enables you to record the way and distance you walk or go by bike. The iPhone SDK has no real multi-tasking in the sense that there are no background processes that run independently of the application and therefore there is no equivalent to Locale or GPS trackers on the iPhone.

The main concept of podcasting is the subscription. With the help of dpod and Locale, all my subscribed feeds were automatically updated and new episodes were downloaded, whenever I plug my phone into the power supply and have WiFi. This is not possible with an iPhone because the applications have no filesystem access. In the end, updating podcasts includes turning on your computer, starting iTunes, connecting the iPhone/iPod touch/iPad with the computer, waiting for the update process to finish and disconnecting your phone.

The official last.fm app on the Android is so much better then its equivalent on the iPhone. First, you could not stream from last.fm while you're browsing the web or doing other stuff thanks to the multi-tasking capabilities of Android and second, and more important, you can scrobble the tracks your listening without having to use iTunes or other plugins. Optionally, you could even configure the last.fm android application to queue listened tracks until you're connected to WiFi to save network charges. This is possible due to the integration with built-in components in Android that it nonexistent on the iPhone.

Of course, there were instant messengers in the AppStore, but thanks to the Android SDK, Meebo IM has two main advantages over every instant messenger on the iPhone: First, it's integrated into the built-in contact application in the way that besides the usually buttons for making a call or sending an email, every contact with an instant messenger address has also a button to chat using instant messaging, and second, the could stay online in the IM service of your choice even if you're doing something different. Applications on the iPhone are lacking the integration into the built-in contact manager and the multi-tasking that is really important in this category of applications.

There are lots of twitter clients for the iPhone and the mobile web interface of twitter isn't bad either, but there all lack one particular useful feature: notifications. You can configure Swift to notify you of arriving direct messages in a way that there is no difference between direct messages on twitter and cell phone text messages.